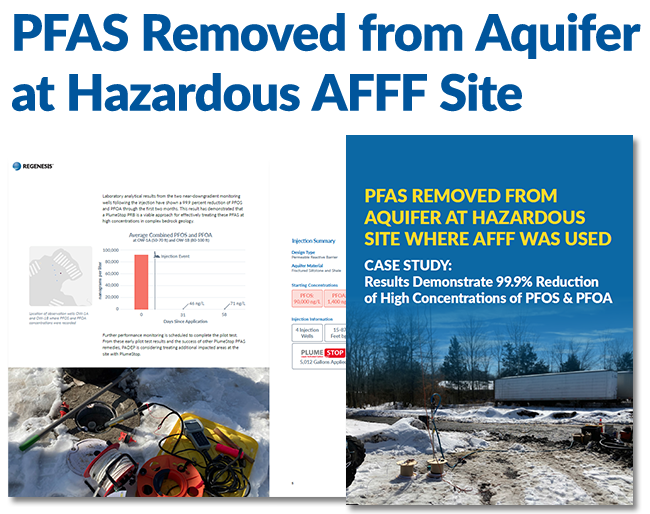 This case study reviews a Pennsylvania Hazardous Site Cleanup Act (HSCA) project where aqueous film-forming foam (AFFF) extinguished a large fire in the 1980s was the target of an innovative pilot study to address per- and polyfluoroalkyl substances (PFAS). Working closely on behalf of the PADEP, Tetra Tech, a leading provider of consulting, engineering, and technical services worldwide, was principally involved in assessing the options and choosing a technology for the pilot test. This effort led to the decision to conduct a pilot study using PlumeStop®, a patented colloidal activated carbon amendment known to eliminate the risk of PFAS.

In 2016, a public supply well in the area was found to contain combined concentrations of perfluorooctanesulfonic (PFOS) and perfluorooctanoic acid (PFOA) exceeding the Environmental Protection Agency’s (EPA) 70 parts per trillion (ppt) Health Advisory Level (HAL). Another public supply well was found to contain combined concentrations slightly below the HAL. Upon notification, the affected wells were taken offline and PADEP immediately investigated the surrounding area. The subsequent investigation revealed that PFOA and PFOS had impacted groundwater, resulting from the chemicals contained in the spent AFFF migrating through the surficial soils and underlying fractured bedrock at the site. In addition to the public supply wells, several potable drinking water wells in the area extracting groundwater from the bedrock aquifer were affected. Filtration systems were promptly installed on the affected domestic wells. With the immediate threats to drinking water addressed, attention turned to strategies that could prevent the further spread of PFOS and PFOA from the source area.